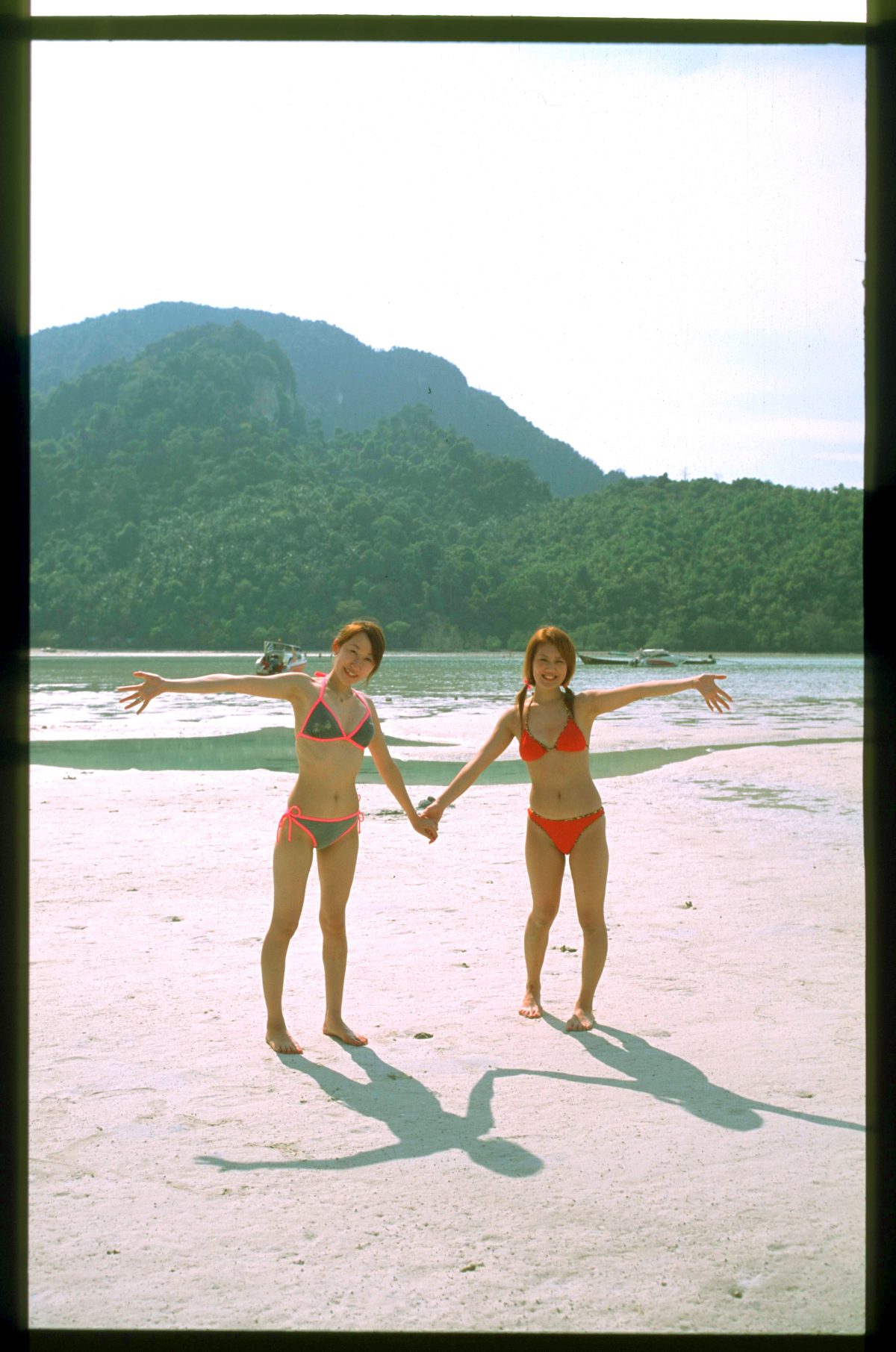 Back in 2003 a fresh-faced young photographer from FARANG magazine visited Koh Phi Phi, on Thailand’s Andaman coast for the first time. I was stunned by its natural beauty, gigantic krasts crowned by green jungle thrust from crystal waters and were accommodated by a cheerful backpacker village on the sandbar between said limestone mountains. We only stayed a night, it was all we could afford on our thousand-baht peridium.

The village got wiped out by the 2004 tsunami and by the time the tourists retuned I didn’t have the opportunity or couldn’t afford to go back, but the dream remained.

The 2020 pandemic provided an opportunity. Miss Sachie had her holidays already booked and was supposed to go to Hawaii but that was off. As we cast around for a Thai destination that could compare I recalled that wonderful trip 17 years ago.

November 2020 was the perfect time. Over the years, Phi Phi had evolved into a party-island. Hotel reviews spoke of loud music late into the night and eyewitness accounts spoke of drunken vomiting and public urination — probably not for me, these days, and not for the lady. Also, being a destination for the young and credulous, we couldn’t afford it in normal times, but now it was on its knees.

Bangkok Airways is a good deal at the moment, unintuitively. Bt5,000 each return to Krabi then a race to the pier to get the ferry to the island. Both trips are fairly comfortable, but require an early start. Accommodation was a ‘pool villa’ (actually one of a number of luxury bungalows around what was a very nice pool). We got this for Bt2,000 a night, which is not bad when there is two of us. God knows what it costs in normal times, probably a lot and certainly out of our range — we would be in the dorm.

The backpacker colony of my youth had been rebuilt into a mixture of bucket-bars, banana-pancake joints and large, club-med type resorts. It’s the pier and the town that makes your first impression of the island so I’ll cover them here. The pier is good, look down at the pilings and you can see seaweed streamers, fish and where they bury themselves into the sand — the water is like glass. The town put me in the mind of chicken-corner in Haad-Rin on full-moon party night, or it would have if I’d been there at two in the morning and out of my head on diet pills. Now the town has been devastated. Have you ever seen a 7/11 just shut down due to lack of custom? Phi Phi has two. McDonalds, Burger King, The Pizza Company, banks, pharmacies and countless tiny bars and food-joints are shuttered. The place hasn’t been decimated (reduced by one tenth), it’s devastated. Miss Sachie commented that it looked like the set of a zombie film.

I can’t say that it’s a very beautiful town. It scores points for being pedestrian-friendly, indeed there are no roads (there are roads, well, a road, on the island but you have to go looking for it) but it is commercially dense, dense, dense. It’s also very battered from years of party-town and, er, improvised construction. Think of a nightclub seen in daylight.

We stayed at Ibiza Resort, famous for its pool parties and and vomit-slick dorms (I’m guessing on that last one, but dorms on an island?) It was damn nice for us though, as we were the only ones there. It’s a 30-second walk to the beach, which we had to ourselves. Loh Dalum beach is the main swimming beach, while Ton Sai has the pier and boats.

Normally the former is full of sun-drenched bodies, tattooed muscle and cigarette buts. I’m making up the last one, well, making them all up but given the littler still washing up it’s not a stretch. The thing is, it’s one of the most beautiful beaches/bays in the world. This is the place I fell in love with in my first year of living in Thailand and Miss Sachie and I were the only ones on the beach, if you don’t count the sea-eagles fishing offshore or the waders seeing anchovies.

We stayed at Ibiza House, kind of. Ibiza is host to the pool party but they also have the more sedate Rawianda Villas. It’s pretty nice.

Back when I travelled alone price and location was my primary concern and I have many tales of scummy flophouses, but when one travels with a lady it does to raise standards.

I really can’t recommend this place enough, it’s the nicest pool I have been in for some time. Speaking of pools, here’s the party pool.

I expect that prior visitors will find this view disarming. Didn’t swim in it but they kept the jets on all day. Now to drink.

I don’t have a good photo of the Cottage Bar, but it’s your pretty standard beach bar. It’s lovely, and quiet. It also happens to be the only bar open on the beach when we are there, although another opened before we left — fireshows. The path to the resort is just behind the bar, in this photo, and is the said 30-second walk from the room. Perfect. You may notice a cat in this photo, more on them later.

There is really nothing better in the world than a good beach bar, well parenthood is pretty good but if you have your kids bring you beers and empty the ashtray, like the staff do here, then child-services take them away from you. Each evening we would sit here, drinking discount larger and watching the tide come in on an empty beach. When it got dark, the lights came on.

Yep, massive sodium-vapour lamps transplanted from a freeway to this beach to keep drunken backpackers stepping on broken glass or something. Indeed, there is a security vibe on the island, lots of CCTV. I assume that it’s a reaction to the 2014 murder of two tourists on Koh Tao. Indeed, there was a CCTV camera pointed at our balcony/patio thing. Pretty sure most of them aren’t working by now. Koh Phi Phi also has what I concluded are panic boxes, a button and a camera that you can push to get help when in distress. The highway lamps were a bit of a shame as I wanted to have a good look at the stars while I was there but it was cloudy most nights anyway.

Now to food. Miss Sachie had done her research and we had a checklist of restaurants to visit and pindrops on Google Maps to assist in navigation. Sadly, this preparation and the anticipation was for naught as the majority were shut. Himalaya and Royal Tandoori look like they are gone forever but Clover House is open and has a DJ at night. We breakfasted most days at Patcharee Bakery, which was pretty good. The really winner is Efe, the Turkish place. In our visit, this was the finest chow-house on the island and also probably the best place we have eaten at in months. Anyway, here’s another photo from the beach bar.

That’s it for today, hope you enjoyed it. Remember that we were there in November 2020 and things can be expected to change pretty quick. Indeed, by the end of the week things were picking up around town so who knows what it’s like now. Stay tuned for part two.