When I moved into Chez Cooper a couple of years ago I was looking forward to having a yard for the kids to run about in, and lazy evenings form ,me with a book and the bats.  Of course, as it turned out, the kids only want to stay inside and watch cartoons and come sundown the air is choked with mosquitos.

However, one event has changed the way I think of and use the yard.  I don’t recall what it was but I took something home from the supermarket, put it in a pot and it grew.  Free food — coming right out of the ground.

I was a changed man.  These days most weekends I’m pulling weeds, watering, distributing rabbit shit fertilizer or generally knocking around the garden.  The big news last week was that the rose apple tree fruited for the first time in living memory.  The mango tree is flowering and already dropping a couple of little ones and the lime tree is much healthier for being out of its pot and into one of their the newly-established raised beds.

A couple of weeks ago the family and I bought a bunch of seeds from the weekend market so I thought I’d document the progress in the soil: 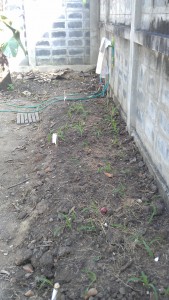 What this rather drab photo records is the rear-yard (actually against the front wall) raised garden bed.  Before anyone asks, the red bulb in the middle is a windfall rose apple that’s been selected to return it’s goodness to the earth. The seedlings in the foreground are yellow corn, they are joined by white corn (Duncan demanded it) and carrot by the tap, which you won’t be able to see in this photo, as they’re underground. 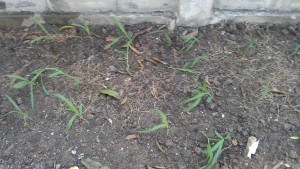 I guess this is after one week in the earth, the corn is already a strapping youth and climbing for the sun.  The stake at the lower right quadrant of this photo indicates that this is the white corn.  This vegetable has never excited me in the slightest but Duncan insisted that we buy the packet and sow it first, so I’m going to force him to eat every kernel that springs from these rows. 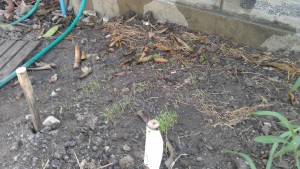 Here we have a blurry and poorly composed image of carrot seedlings.  I’ve never grown carrot before and was surprised to see how small the seeds were.  After sowing, I spoke to my father who advised me that they shouldn’t be sown too deep (oops!) and that I may not see them otherwise.  But he never counted the punishing Thai sunshine, nor the unforgiving clays of Bang Sue, which sees dozens of infant seedlings push their way into the light.  It’s also here that I spray out the rabbits’ under-cage trays each morning so a steady diet of shitty, pissy water probably doesn’t hurt. As watersport-loving coprophiliacs, vegetables are probably the kinkiest of foods to grace our plates. 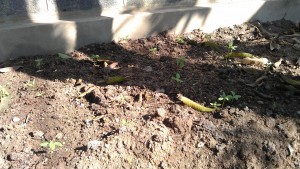 Squint just right and you’ll be able to see regular rows of sunflower seedlings marching into the sunset.  Due to the lack of space and the disappointing result of our last sunflower effort (not a single sprout), we put two seeds in each hole with the intention of stacking the odds.  As it turns out our defecating rabbits have done it again and each tender stem is growing with its twin.  Common sense says that I should abort one growth so that the other may be unhindered in its search for nourishment, but I think I’ll let them fight it out for my amusement.

Here’s something to keep you awake late into the night, wondering how things will turn out.  I know it will be soaked sheets bunched around my quivering limbs for me over the next agonizing week or so, for this final plot was only yesterday seeded with all the leftover seeds from the last couple of years, most of which have never sprouted.  I’m making a permaculture-type bed here with the idea of letting whatever grows first take over, or at least form an uneasy symbiosis with its bedmates.  Your nails will be bitten down to the quick, as will mine until the next bulletin from the bottom of the garden.

Next episode: The Trials and Tribulations of being a Banana Farma and Meet the Banana Splitter: 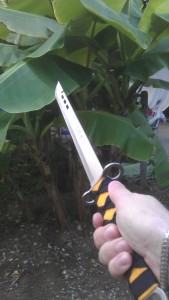 P.S: there’s also a lump of ginger and a bunch of garlic cloves that have sprouted that are in their own mini-bed.  The previous tenants left a fine clump of galaga and another of turmeric (the former I only know because they came over and told me, the latter I only recognized after my own started to grow) and many chilli plants (that I had mostly pulled, assuming them weeds) so I’m hoping to infest the property with my own leavings works before I, too, move on.